A chat with Sebastian Montoya

A few weeks ago, just before the last race in Vallelunga, we had the opportunity to interview Sebastian Montoya, Italian F4 driver for Prema Power Team and son of the Colombian driver Juan Pablo Montoya.

The young driver, in order to pursue his dreams, is forced to travel a lot and he told us about the difficulties he has faced and how he has managed his life between three different countries.

What is it like travelling so much at your age? Are you often alone or do your parents accompany you?
In the last years when I was racing karts, I was going back and forth between school and racing, traveling a lot in Europe. This year, because of the difficulties create by Covid, I decided to enroll in an online school so I could spend more time here and not miss too many school days. As soon as I can (as soon as possible), how ever, I am able to go back to Madrid to relax in my home, where I grew up. With this year’s calendar full of races, I also found myself spending a month in the apartments provided by Prema with Dino Beganovic and Gabriele Minì, my teammates.

What is it like living in Italy? What strikes you about our culture? What about the language? Are you learning it?
The best things about Italy are pizza, pasta and gelato. You can’t find these three things anywhere else. For me, the food here is really the best, especially in Tuscany. When I was at Mugello, every night, Dino, Gabriele and I would go out to eat the Fiorentina (steak). The food is really special but so are the people and the language. When I was home with my teammates, Gabriele would try to teach us some Italian. It is similar to Spanish that I learned when I was little, so it can be easier for me but sometimes it gets complicated!

The young son of art, comes from an excellent career in karting started at the age of 8 years old in the United States but has also shown his potential in European competitions, rising to the top ranks of the OK(single speed) category in 2019. His talent has impressed the Rosin family who chose him to be part of their team, seeing him as a title contender in whatever category he was to take part in. Having such an important surname with him, has it affected the boy’s life?

We can say that gasoline runs through your veins, you started first with karts and now you switched to cars. What led you to follow your father’s footsteps and what is your relationship with him?
Since I was a child I grew up around him and his races, so it was natural for me to start karting. Gradually, I started to climb the various categories and it was a great leap forward, there is more speed and also more danger. I love speed and every time I always want more. With my dad it was more difficult when I was racing karts because everyone knows who Juan Pablo Montoya is and it took me a while to understand that on the track he is just the coach, while, when we are at home, he’s just my dad.

A pilot of the caliber of Juan Pablo Montoya can only give good teachings to his son, in fact Sebastian, told us how he taught him to deal with an accident.
Usually, in those moments, I think of my father. He taught me to let go the steering wheel and count up to the moment of the bang. These moments seem to last an eternity and you always wonder when it’s going to end, then you’re in the barrier and you think ‘okay it’s all over’. When you get in the car you are aware of the risks you are about to take. Accidents of all kinds can happen at any time, the risk is part of our work and we must be prepared for it.

If you could pick any two drivers from the past, who would you choose as a teammate, and who as a rival?
As a teammate I would say my father because he would push me to improve. As rival Senna, his driving level was very high. Ayrton had an incredible talent and a great mental strength.

Speaking of teammates, how is the relationship with the current ones? Which is the funniest?

The relationship with my teammates has grown more and more over the last year, especially with Dino because we live together and we have known each other since the karting days. We have always been good friends but this year we have become even better. In the race we are all very competitive and we fight among ourselves but then off the track we go back to being friends as we were before, leaving aside any disagreements. On track is one thing, off track is another. Regarding the funniest, I can’t name any of them, they are all very nice and when we are together we always have fun.

Before a race do you have any rituals? A mantra or motto that helps you? Do you listen to a song or do anything in particular?
I don’t know if Dino will be happy with what I’m about to say, but usually before races, he, Gabriele and I stay in our van, turn on the music and dance, jump and have fun before going on the track!

What is it like to race with such a prestigious team, probably the best in the feeder series? They won a lot of championships this year.
Prema is one of the best teams in the minor categories, there are a lot of people following you without putting pressure on you; they don’t tell you to focus on winning races but they help you to connect with the car to drive at your best and, consequently, win. In Prema we are a big family.

We know that during your karting career you were supported by the Ferrari Driver Academy. Now that you have switched to the world of single-seaters, you are no longer part of it. What has changed?
The partnership with FDA was included in the contract I had with Tony Kart, I wasn’t really part of the Academy. I talked about it with my father and we concluded that it is still too early to think about joining a youth program, Mick Schumacher, for example, only joined the Ferrari Driver Academy in his second year of Formula 3 with Prema. I’ve only just started, so first I have to focus on getting results and victories, then the opportunities will come.

Since we talked about your father, how is the relationship with the women in your family?

My youngest sister, Manuela, is so cute, she’s like a puppy! The relationship with her is very good. With my other sister, Paula, sometimes it’s difficult because she’s a little younger than me so at times we hate each other but in reality we love each other, we all know that he relationship between brother and sister is like that. With my mom I am very close, during the quarantine she has been my training partner. All in all we have a good relationship with each other, we are a very close family.

Like any self-respecting young man, Sebastian, too, is very active on social media where he lends a hand at giving his opinion on a race that has just finished or cultivating a relationship with his follower through many Q&As. Something that has not escaped the eyes of Multiformula, who loves to interact with his fans!

I remember a time when they asked you about your top 5 drivers and among them you mentioned Pierre Gasly. Many would have chosen Max Verstappen or Charles Leclerc, the most talked-about youngsters of the moment, because they are the most popular drivers, why did you choose the Frenchman?
When they asked me about the top 5, it was difficult to answer. Max and Charles are very good but in terms of mental strength Pierre is a step ahead. It can’t have been easy for him. He lost a friend and was demoted from RedBull to Alpha Tauri. Nevertheless, last season he got a podium in Brazil and this year his first win in Monza. He saw the orange McLaren behind him getting closer and closer, more and more and it couldn’t have been easy to keep it behind until the very end. Pierre Gasly showed that he could restart as if nothing had happened, that’s why I think he’s a good driver.

To conclude, how do you see yourself in the future? Is F1 your goal or will you evaluate other categories in the world of motorsport?
Formula 1 is obviously the top level category, the tracks are the best and I think that driving in F1 is the dream of every driver but if I don’t make it for some reason, I’ll keep driving because it’s what I like to do. I’m not the kind of person who only aims for Formula 1. I like driving and I could do it every day in any category. There’s always speed and competition. I’m very competitive, especially with my dad, my goal is to do what he did but… better! So I would do anything, whether be it NASCAR, IndyCar, WEC, Formula 1 or even Rally. I can’t see myself being far from the world of racing because it’s what I love to do, because speed is part of me.

The Multiformula team wants to thank Sebastian Montoya for his availability and wishes him the best for the future, because a talent like his deserves to reach the top!
Martina Spinello and Irene Carolla, edited by Carlotta Ulgelmo 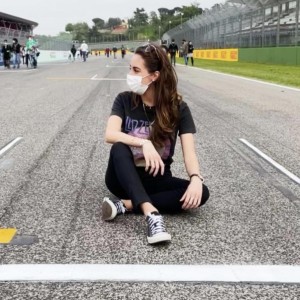